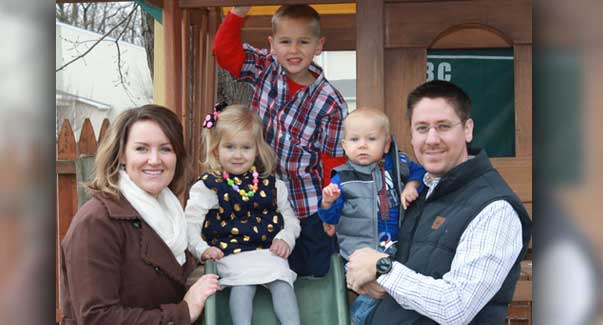 Everything Looked Great…
At Least on the Outside

I grew up in a small town, the second child to two typical, middle class parents. My dad was a civil engineer, and my mom volunteered in various capacities along with being a stay-at-home mother. Both of my parents were very religious, and were consistent in taking their children to church and teaching them about God and the Bible. They even sacrificed financially so that all of their children could attend a private, Christian school.

From the outside, I seemed like the perfect Christian kid. I went to church, prayed, and even read my Bible on a regular basis. I even prayed the sinner’s prayer and asked Jesus to “come into my heart,” though I really didn’t understand what that meant; I just did it because I knew that’s what a good kid was supposed to do.

“I wanted my parents, teachers, and people around me to think well of me.”

As elementary school turned to junior high, there were some big changes in my life. By far the biggest was my dad giving up his good-paying civil engineer job, because he felt like God wanted him to be a preacher. This was a big change for me. Now, I was a preacher’s kid; people expected more from me, and I was determined not to disappoint them. My whole life was wrapped up in building this perfect little Christian world for myself and my reputation.

There were times at church that I would hear about how every person is a sinner before God. I would hear Bible verses like Romans chapter 3 and verse 23 which says, “For all have sinned and come short of the glory of God.” I would hear about Jesus Christ coming to this earth to pay the penalty for my sin. And I would hear from the Bible about my personal need to repent of my sins and put my faith in Jesus in order to be saved. There were times when I felt God speaking to my heart about my need to do this, but I would brush it aside. After all, I was a pastor’s kid.

“I had prayed a prayer when I was young, everything was fine…at least that’s what I wanted people to think.”

Shortly before I turned 14, the principal at my Christian school, came to our home room and explained how he had just gotten saved. He said that he had fooled himself into believing that he was OK with God, but inside, He knew something was wrong. I was thoroughly shocked and remembering thinking, “How could he have been lost? It just isn’t possible.” He was such a good, decent person. I heard his story numerous times and each time the words that he spoke seemed to haunt me. I remember one time being so bothered that I was in tears, knowing that his story was basically my story. However, with time, I was able to escape my concern.

When I was 15 years old, our church youth group traveled to Missouri to attend a summer youth camp. Each evening, we heard a Bible message from each of the pastors who were there. The second night we were there I heard a message that I will never forget. The pastor talked about people who lived a lie; they acted like they were true Christians, but on the inside they were not. This thought hit me square between the eyes. I had an uncomfortable feeling in the pit of my stomach; it felt like he was talking directly to me. I finally realized that I wasn’t OK with God. I was a sinner and deserved to go to hell to pay the penalty for my sin. I had not committed any terrible outward sin like stealing or murder, but the sins in my heart (like pride and selfishness) were just as bad. The Bible says in James 2:10, “For whosoever shall keep the whole law and yet offend in one point, he is guilty of all.” I knew that I was guilty before God, and that I needed to be saved.

“But, I was too proud to admit to any one else that I was not the perfect Christian that I had made myself out to be.”

After all, what would everyone think? So, I left the camp chapel that night still lost. I went through the next day knowing that if I would die then and there I would go to hell. It was the first day of my life living with the realization that I was not OK with God; I felt horrible.

That night, we were back in the chapel listening to a Bible sermon once again. I felt God speaking to my heart once again, telling me of my need to be saved. After the sermon was over, the preacher invited those who needed to be saved to come to the front of the chapel, and I knew I needed to go. Tears were streaming down my face as I knelt at the front. I asked God to send someone to help me. Moments later my dad came and knelt beside me. I told him that I knew I was lost; it was the first time I had admitted to anyone that I had a problem. My biggest problem, my pride, had been shattered. My dad asked me if I wanted to go somewhere to talk about it, but I told him I wanted to get it settled right away. Right there, at the platform, on August 19, 1998, I finally admitted to God that I was a rotten sinner worthy of Hell, and that I needed the blood of Jesus Christ to cover my sins. I asked Him to forgive me of my sins and change my life forever.

I have heard it said that people who have a relationship with God are weak in that they need a crutch to lean on. I guess that’s supposed to be an insult, but it doesn’t offend me. I know I need God in my life, and I don’t know where I would go if I did not have a relationship with God to lean on. He gives me guidance through His Word and a direction for my life. I can’t imagine life without Him.