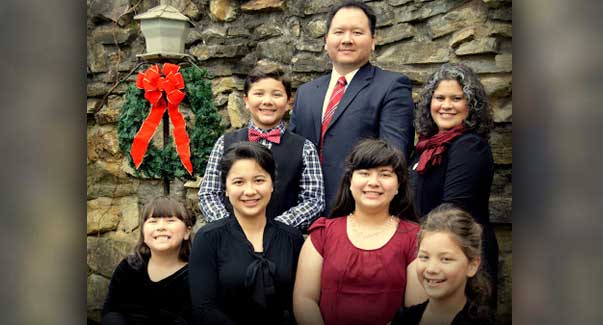 I Thought I Had it All

I was raised as an only child with my father in the military, so we moved around a lot. I pretty much kept to myself and was quiet growing up. My family did not get out to church very often, so I did not know a whole lot about spiritual things. What little I knew came from my mother, and she basically said I just needed to believe in God. So I said I believed and went on with my life, not giving it a second thought. Being an only child, I was spoiled and not very appreciative of the things I had. I grew rebellious and didn’t like being told what to do. So at the age of seventeen, I decided I was moving out. I went through a couple of relationships and finally found my wife, Jisela.

Things started moving along rather quickly. Within a couple of years we were married, bought a home, got a new car, and had a newborn baby girl, Jillian. I was so happy. I thought I had it all! Little did I realize that I was missing the most important thing – a relationship with Jesus Christ. Matthew chapter 16, verse 26 says, “For what is a man profited, if he shall gain the whole world, and lose his own soul?”

Shortly after Jillian was born, we decided that we needed to find a church. Not that we felt like going to church, but because we were being pressured by friends and family to get Jillian baptized. We started visiting churches and looking for one that was comfortable. We weren’t concerned about what was being preached. We just wanted to fit in and get Jillian baptized. A family member suggested that we check out Lehigh Valley Baptist Church, so we decided to visit there.

“We enjoyed the preaching and the people were very nice, so we kept going.”

After a couple of weeks, we figured we should find out about getting Jillian baptized. It was at that time we saw a pamphlet at the church about infant baptism. It explained from the Bible what baptism is truly meant to be. The pamphlet explained that baptism is a picture of Christ’s death, burial and resurrection; it is for a person that has already been saved; and it symbolizes death to their old sinful life and birth to a new life for Christ. When we learned that this is what the Bible taught, it was settled for us. We saw that baptism had no saving value for newborns and was meant for new believers.

We continued attending the church, even though our main reason for going to church had changed. We now had a hunger for the truth that was being preached there from the Bible. One of the families invited us to do a Bible study with them, and we accepted. We learned a lot about what the Bible had to say — things we had no idea about before. We learned that the Bible is the Word of God and is truth. It shows us how we are all sinners before a holy God and the payment for our sins is death and eternity in hell. We also learned that the only way to heaven is through Jesus Christ and a personal relationship with Him. He was our substitute and paid for our sins. I also learned that my idea about sin was completely different from God’s. I thought I had to physically commit a sin to break God’s law, but it is so much more than that. God sees our hearts and knows our thoughts. Committing a sin in thought is just as bad as the act. Even though no one else can see it, God still sees it. God sees the lust in your heart as adultery (Matthew chapter 5 verse 28) and the hate in your heart as murder (Matthew chapter 5 verse 22).

“After completing the Bible study, I knew I was really in trouble, but I was not ready to change yet.”

We continued going to church services and were coming under conviction from God’s word. My wife got saved, and I was happy for her, but didn’t really understand the importance of what she had done. I just kept holding off, thinking I would worry about it later. But then it started to hit me. What if later doesn’t come? I knew that I believed in God, but I had never truly put my faith in Jesus Christ. One verse that really hit home was John chapter 3 verse 3, “Except a man be born again, he cannot see the kingdom of God.” In plain words, God says that unless you are born again, you aren’t going to heaven. WOW! Before that I always thought that born again people were religious wackos that had gone off the deep end, but now I was starting to see the truth. I was finally realizing that I had never had that life-changing experience. The Bible says in Second Corinthians chapter 5 verse 17, “If any man be in Christ, he is a new creature; old things are passed away; behold, all things are become new.” I knew that I had never turned away from my sin and turned to Christ. I knew that if I died, I would spend eternity in hell.

One Sunday, the pastor was preaching on Moses and the Passover. Moses was trying to free God’s people. But Pharaoh was stubborn and wouldn’t listen to God, even after he had performed many miracles. Finally, God was going to send a plague throughout the land, and He told Moses what would protect His people. Moses instructed the people to apply the blood of a sacrifice to the doorway of their home. It was the only way to turn away God’s wrath. I couldn’t take it any longer. I knew God was speaking to me, and I knew that I needed the blood of Christ applied to my life to turn away God’s punishment for my sins. So that day, I prayed to God to forgive me of my sins, and I accepted Him as my Lord and Savior.

“Immediately after, I felt a calm and a peace, and I knew I had done the right thing.”

God had forgiven me, and now I was acceptable to Him. I didn’t become a perfect person; I’m far from it. But now I am a sinner saved by God’s grace. I am more aware of my sin and do my best not to sin against God. The Holy Spirit makes me aware of these things. I am also more understanding of the things of God. Before I was saved, I tried to read the Bible, and it didn’t make any sense to me. But now my eyes have been opened, and it speaks volumes to me. Going to church is a real joy now, and speaking to others about Christ has become my mission. Now my life has purpose, and I’m not afraid of what is to come.

I pray that now, since you have read my story, you are thinking about your relationship with God. You too can know where you stand with God and that you have a home in Heaven for eternity. It is as simple as repenting of your sins and putting your faith in Christ. Don’t put it off for another day. The time is here and now. Second Corinthians chapter 6 verse 2 says, “Behold, now is the day of salvation.”