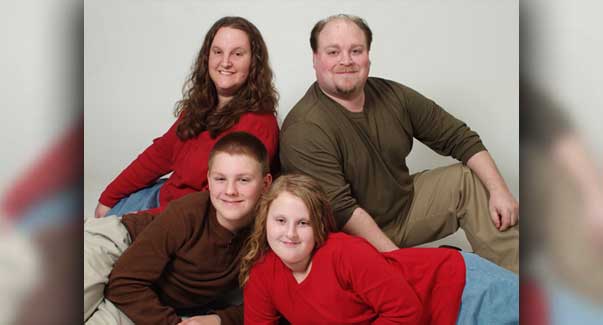 The Most Important Thing in Life

I was born on October 3, 1977, to Dan and Francine Cefola. From that moment, even though I didn’t know it, I was condemned to die. The reason is because about 6,000 years ago, the first man and woman disobeyed God and became what the Bible calls sinners. From that point on, this sin has been passed on to everyone who has ever been born.

My dad was Catholic, but didn’t practice, and my mom was Jewish, so I was brought up Jewish. Like all other little Jewish boys growing up, I would go to temple on the High Holidays like Yom Kippur or Rash HaShana. I never really gave God much thought apart from these holidays, and even then He wasn’t important to me. He was just a story that I had been heard about like at the Passover Sader. God brought our people out of Egyptian bondage. But beyond that I was never bothered with God.

So I started to think if I do not believe in God, the most important things are totally up for grabs, and I get to be my own god. However, if God is real, then saying that I don’t believe in Him or worshiping Him in a way other then what He wants, or to have an improper view of Him is idolatry. (Exodus chapter 20 verse 3, “Thou shalt have no other gods before me.”) If there is a God, then the question of what is most important in life isn’t up to me anymore; it is for God to say.

“If there is a God, then that means He created us in some way, and He might have some rules for us.”

After my bar mitzvah, I was no longer satisfied with the Jewish faith or what I knew of God for that matter. I didn’t really know for sure if there was a God, so I looked at many other religions, but I did it from an atheist point of view, searching to find God. By the time I was 16, I thought God was not real because I couldn’t find Him. I also thought that religion was nothing more than a way for people to be kept under control. As a matter of fact, I believe to this day that man-made religion was invented to control “the masses.” The important thing isn’t what religion you are or how were you raised, because even though you have the best intentions and the most sincere heart in the world, you can still be in the wrong faith, and be sincerely wrong. I am sure that you are saying, “Who are you to say such things?!” Well, I am not the one saying it; God has said it. (Jeremiah chapter 17 verse 9, “The heart is deceitful above all things, and desperately wicked: who can know it?“)

When I was seventeen and still in high school, I was very involved in music. In Chorus, I met a young lady named Suzanne. She seemed to be very religious. One of things that impressed me the most about her was that she wasn’t afraid to say, “I don’t know” when I had a question about God. She always said that she would get back to me with an answer, and the next time I saw her, she would have the answer to the question that I had asked! After a while she asked me to go to a Bible study. That way, I could get a lot more of my questions answered. I had a lot of questions, so I agreed.

At this Bible study, I discovered something that I had not found anywhere else. They not only believed in their God, but believed that God wrote the Bible, and that it was perfect and with out any error in it, and that God had preserved it from the time He gave it to the original authors up till today. This was ridiculous to me, because we all know that the Bible was written by men, not by God, and the Bible is full of mistakes. When I said this to them, their response was, “Could you please show us the contradictions?” Now I had never read the Bible before, so of course I didn’t know where the contradictions were. I didn’t even know for sure that there were any to begin with.

“So I asked Suzanne to give me a Bible, so I could check this thing out for myself.”

One of the verses, we looked at in the Bible study was Job chapter 38 verse 16, “Hast thou entered into the springs of the sea? or hast thou walked in the search of the depth?” God is talking to Job and asks these two questions. The Book of Job is the oldest book in the Bible, and it was written about 4000 years ago. I know that man has still not been able to figure out the depths of the sea in some places, and we didn’t know that there were springs in the sea until 50 years ago.

Then we looked at some prophecies. Jeremiah chapter 31 verse 8 and 9 says, “Behold, I will bring them from the north country, and gather them from the coasts of the earth, and with them the blind and the lame, the woman with child and her that travaileth with child together: a great company shall return thither. They shall come with weeping, and with supplications will I lead them: I will cause them to walk by the rivers of waters in a straight way, wherein they shall not stumble: for I am a father to Israel, and Ephraim is my firstborn.” These verses, prophesied over 3,000 years ago, were fulfilled when the United Nations gave Israel back to the Jews and formed the state of Israel.

I started going to youth group meetings at Suzanne’s church and got to be close friends with the group leader. We spent a lot of time talking about the Bible and who Jesus was. I had always heard growing up that Jesus was killed because He was a rebel making trouble for the Romans, but He told me of the love of God and how God planned the death of Jesus Christ and used it to bring salvation to the world. “That is all well and good,” I said, “but what does that have to do with me?” He explained how God created man and how man disobeyed and fell into sin, and how every person born is a sinner before God because of that disobedience.

At first I didn’t believe it. How could Adam disobeying God make me in trouble? He explained that when God made man, he was not perfect, but innocent, neither sinful or sinless. God gave them only one command to obey. Genesis chapter 2 verse 17, “But of the tree of the knowledge of good and evil, thou shalt not eat of it: for in the day that thou eatest thereof thou shalt surely die.”

“Adam chose to break God’s command and was no longer innocent. He was now sinful.”

God killed an animal and made Adam and Eve coats of skins to wear to cover their sin, but God also make a promise. Genesis chapter 3, verse 15, “And I will put enmity between thee and the woman, and between thy seed and her seed; it shall bruise thy head, and thou shalt bruise his heel.” God promised that a Messiah was coming to not just cover the sin, but to pay for it once and for all. This was the purpose of the coming of Jesus Christ to the earth. He was to die on the cross as payment for the sins of all who will identify with Him. He had to shed His blood so the Law of God that you, and I have broken could be atoned for. Leviticus chapter 17, verse 11, “For the life of the flesh is in the blood: and I have given it to you upon the altar to make an atonement for your souls: for it is the blood that maketh an atonement for the soul.” Hebrews chapter 9, verse 22, “And almost all things are by the law purged with blood; and without shedding of blood is no remission.”

One Sunday night, I prayed and told God that if He was real and Jesus was the way, He would have to show Himself to me. When I shared my prayer with Suzanne, she told me, “He will show Himself to you as long as you are looking for Him with all you heart. Jeremiah chapter 29, verse 13, “And ye shall seek me, and find me, when ye shall search for me with all your heart.”

School was soon over, and Suzanne had a missions trip that she was going on in July. I was home alone and decided to go to the youth group on Wednesday night, like always. I don’t remember much about what happened at the meeting that night. But, I do remember later getting in my car and not wanting to go home. I drove around for a while, thinking about all the things that I had seen and heard over the preceding three months. I was convinced that the Bible was the Perfect Word of God without error.

“That also meant that I believed the New Testament and that Jesus Christ was the long awaited Jewish Messiah.”

Have you called on the Lord to save you? You might be thinking, “Well, I am not as bad as you,” but the Bible says in Romans chapter 3, verse 23, “All have sinned and come short of the glory of God.” Also in Romans chapter 6, verse 23, “For the wages of sin is death, but the gift of God is eternal life through Jesus Christ our Lord.” John chapter 3, verse 3, “Verily, Verily, I say unto thee, Except a man be born again, he cannot see the kingdom of God.”