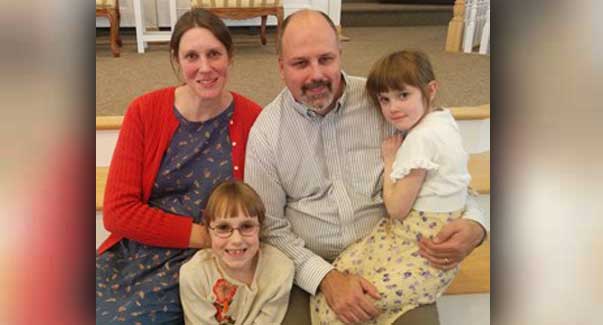 I Was Looking for a Feeling 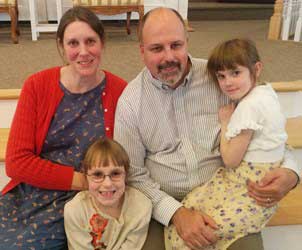 My name is Becky Fetterman, and this is the story of how God drew me and saved my soul. I was born into a Catholic family in Omaha, Nebraska. We always went to church. When I was quite young, I remember one service in particular when I felt “holy.” I thought it was a good feeling to have and that somehow by this feeling that I had felt God’s presence. We moved to PA in 1986. This was a painful experience for me, as I left behind all I ever knew.

Over the next few years, I occasionally felt that “holy” feeling and even asked my Mom for a crucifix of my own to worship. I honored and revered that crucifix for many years. But during my teen years, I grew disillusioned with the people at the church. They would do things that I thought were disrespectful to God—chew gum, talk, and leave church right after communion. Communion was something very special and not be taken lightly. In my self-righteousness, I thought I was the only one trying to honor God. So I figured I could worship God my own way and left the church.

After I was married, I started thinking about returning to Mass, so I chose a Catholic Church near where I lived. I went for confession, did my penance and felt good in that beautiful church with gold and stained glass and statues. I told my mom that I had gone, and she said the angels in heaven were rejoicing. It felt good to go back to church, but I never really felt like I fit in there. I stuck out like a sore thumb amidst all the old ladies. So I just kept praying the rosary and numerous other prayers from Catholic books sometimes for hours at home on Saturday mornings and felt very solemn and self-righteous. Then a co-worker started to challenge my beliefs about Mary being the mother of God. I couldn’t explain or refute what he said and soon started to question Mary’s part in Catholicism until I totally rejected her. I found a church closer to home and went there, but there was the same feeling of a cold and hurried congregation. By this point, I was really bothered by Mary and would refuse to sing to her.

“The homilies were pointless or vague, and I never got anything out of them. Eventually I stopped going altogether.”

Since I was working the night shift, I began listening to a Christian radio station to help pass the time. I learned a lot about the Bible, which filled my proud head up with knowledge. One preacher would always say that you needed to be in your place of worship on Sundays. This bothered me because by now I had no church to go to. So I would turn off the radio just before that part of the broadcast. I dreaded his words, and they would ring in my ears for days. I didn’t want to go back to the Catholic Church. I didn’t want to go to the Methodist church that my husband grew up in. I didn’t know where to go. So I asked God to show me where to go to church. When a Jehovah Witness lady came knocking on my door, I thought that God had answered my prayer. I studied with them for awhile, but soon saw that what they believed did not agree with the Bible. So I made up a lie and broke contact with them, and now I was churchless again.

A few months later, Nancy Repsik told me about the Baptist church she was attending and invited me to go. The church was a mile from my house. It was October 2004, and I had a week’s vacation, so that Sunday I went to church alone. I filled out the welcome packet, proud of my knowledge of the Bible because of all the radio programs I listened to. I was warmly welcomed by some sweet ladies. One of the ladies did a Bible study with me, but I didn’t understand most of what we studied. In the meantime, my husband started attending church with me. He was saved after a few weeks and started growing and changing. I felt more and more uncomfortable with myself because I knew I needed to be born again like Jesus said, but couldn’t seem to get there. I agreed with the Bible teaching that I was under and even dropped the worldly music I listened to and started wearing skirts. But all this just made me bitter inside because I knew this was outward stuff. I had not changed on the inside.

This went on for several years. I wanted so much to be saved, but I just didn’t “get” it. “What is wrong with me?” I asked myself on many an occasion. I tried to understand repentance because I knew it was a necessary ingredient of salvation. The testimonies of others mentioned how they saw themselves before God or how they realized they were lost. So that’s what I was looking for—a feeling. I knew I was lost, but I didn’t feel lost.

“Oh, what mental anguish I put myself through. I kept going around in circles chasing repentance.”

By this point, I was so ashamed that I had been attending this church for years and still I was not saved. I was envious of the tender hearts of the young kids and wondered why salvation was so easy for them. I needed help, but I didn’t know who to ask or what to do. Every service I would expect to get convicted so I could run to the altar and cry aloud to God and be saved. That never happened. Instead I would be full of fear of being “convicted,” and I wasn’t even listening to God, or I was running from Him, and I would come home empty and troubled. All I could do is ask the Lord for mercy, asking Him not to let me go or give up on me. Long I clung to my idea that I didn’t have a repentant heart, and long I waited for it to happen. So around and around I would go in endless circles of telling God what to do and never seeing it happen.

In 2009, when my second daughter was born, my Pastor visited me in the hospital. He asked me how I was doing spiritually, so I told him of my struggles. He said when I was feeling better to let them know, and we would meet to talk about it. So a few weeks later, we met, and my assignment was simply to read the book of John. He said to note any verse that caught my attention and write down what I thought the verse was saying. I didn’t want to read the book of John because I feared the familiarity of it, but I told God that I would obey my Pastor even if I didn’t feel like it was the best place to be. I also asked God to speak to me and to help me. As I read, I started to notice a pattern, and strangely enough, it was not repentance for any sin that struck me—it was my unbelief that I kept seeing.

The next time we met, Pastor noted the verses that pointed to my unbelief, and he talked about trusting God. Using the example of a Ferris wheel, he said if you want to ride it, you simply trust that it will hold you up and just get on, even with fear and trepidation. He said that God knows and understands me, but I need to believe Him. I asked him about my lack of feeling for sin— knowing that I was lost, but I didn’t feel lost. He said, “So you are good enough to go to heaven?” “No!!” I said, “I know I have sinned and am not good enough to go to heaven!” He said that was repentance, in that I believed what God said and not in my own goodness. I couldn’t believe what he had just said. My mind flashed a thought for a second, “Could it be that easy?” Suddenly I realized that what God was asking of me was to simply trust Him and ask Him to save me.

I was excited throughout our talk, and I wanted to come to Christ and to ask God to save me, seeing that the other barriers seemed to have disappeared. I was willing to drop any of my misconceptions. I thought, “If all I have to do is trust in God, then let’s just do it!” But then my thoughts would get all muddled with questions. Do I have to ask out loud? How do I know if I really trusted Him? Getting more and more confused and distracted as the hour passed, we parted ways, and I didn’t know if I fully understood or remembered all that we talked about. Before I left, he repeatedly told me to just trust God and take Him at His word.

On the way to work, I stopped at a red light, and right there I asked God to save me. I told him that I could trust Him with my life, and I thanked Jesus for dying for my sins, committing myself to Him as best I knew how. Later as I drove home from work, I asked God to speak to me and assure my heart that I was saved. I turned on the Christian radio station, and the scripture reading was from Isaiah chapter 38:17, “For thou hast cast all my sins behind thy back.” That was really neat, and my heart raced and hope surged within. A little bit later, I asked God to comfort me and to assure me again. I specifically asked for comfort, which I thought was a dumb word to use. Soon they were reading in Isaiah chapter 40, which starts out, “Comfort ye, comfort ye my people.” I couldn’t believe what I heard.

There were times over the next few months that I struggled with not feeling saved. Then I recalled Pastor saying many times that if I was looking for a feeling that God probably wouldn’t give it to me because God wants trust and not feelings. Fretting over my troubled feelings, I knew I needed assurance from the Word of God. One verse in particular that the Lord has used in my life is Jeremiah 17:9 which says, “The heart is deceitful above all things and desperately wicked.” “Yes, God, you are right! I can see that my heart is wicked! I can’t trust it—I need to trust what God says.” I had never understood that verse before I was saved, and always tried to feel conviction over it, but never did. It was like God rewarded my teeny-tiny faith.

Gradually, God has been growing me and making changes in my life. I have a better view of my own sinfulness now — not with condemnation, but rather in agreement with God. “Yes, you are right. I can see it better now.” That was not the case before I asked Him to save me. Another verse God has used in my life is John 6:37, “…and him that cometh to me I will in no wise cast out.” Did I come to Him? Yes, as best as I knew how. Will He then cast me out? No, never! So I choose to trust Him, and as I do, He reveals more to me. I now understand that salvation is a commitment — a continual trusting. You commit to God and start walking with Him, and He begins to change your life. I still have a long ways to go, but I am thankful that I don’t have to worry or struggle any more.