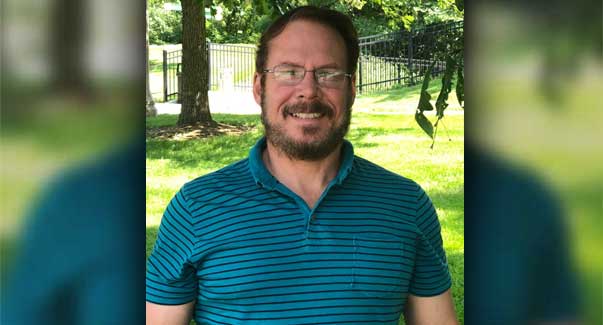 “Where Sin Abounded, Grace Did Much More Abound!”

Romans 5:20 states, “But where sin abounded, grace did much more abound.”

I did not grow up in a Christian home, and at the early age of 12, I got involved with drugs and alcohol. I lived in the city of Easton; I grew up in a gang on 11th St. in Easton. Although I played sports and tried to maintain a popular life in school, the drugs and the alcohol began destroying my life and really putting a stress on the relationship with my parents. On two occasions, I was arrested, and that saddened my father to have to come down to the police station to bail me out. Each time, it just got worse and worse with my relationship with my mom and dad. I know that they were frustrated with the way that I was living my life.

I’m thankful I did graduate. I don’t know how I got through school, but after school, I really didn’t want to go to college. I didn’t have many job opportunities before me. That summer, I went with my friend to Paris Island, South Carolina, where his brother was graduating from the Marine Corps, and there we made a commitment to each other to join the Marine Corps. Thankfully, I did. The end of that summer, I went to Paris Island, and there my mind began to clear up from all the drugs and the drinking as a teenager.

I actually was involved in that over six years of my life, day in and day out, partying. I was so thankful that I got away from that. That was the best thing that could have happened to me. My mind began to clear up, and I began realizing the condition I was in my life. I did write my parents, and I asked them for forgiveness while I was in boot camp. I know they were happy to receive that letter, but the truth of the matter is, I did not have any strength to overcome my own sin.

“I didn’t know how I could clean up my life, even though the desire was there.”

After boot camp, I was stationed down at Fort Leonard Wood, Missouri, which was a joint training school for engineers, and right next to me in the open squad bay, I met a Christian. His name was Kenny. He became a good friend to me. He taught me the Word of God during the week. He invited me to church on the weekends. I’m thankful that instead of going out and drinking with my friends on the weekends, I did go to church with Kenny. It was Tabernacle Baptist Church of Lebanon, Missouri.

It was there that I heard the Gospel preached in the morning service, and in the evening service, I remember part of the message that the pastor said that Jesus Christ shed His blood on the cross for our sins to forgive us of our sins and that through His blood we could have a new beginning in life. I realized right there, that is exactly what I was searching for in my life. They gave an invitation. I went forward, and a man from the church took the Bible and showed me out of the Bible how that I could know for sure that I am saved by trusting in Christ and repenting of my sins. It was March 19, 1981, that I repented of my sins and placed my faith in Jesus Christ as my Lord and Savior.

“Sin was destroying my life: the drugs, the drinking. But I am so thankful that through Jesus Christ and His grace, my desires were changed.”

I did not desire to go out and drink anymore and smoke marijuana or do any other drugs. But instead, I got baptized, I became a member of the church, and I learned how to serve God. It was there in the church that God called me to preach, and in 1983, I surrendered my life to be a missionary. I am thankful that God brought into my life a wonderful wife. Her name is Michelle. We have four wonderful children, and we’ve been able to serve God for these past 23 years as missionaries to the country of Chile and around the world.

It is all because of the grace of God, and God’s grace is sufficient for you. God’s grace can change your life as He changed me.