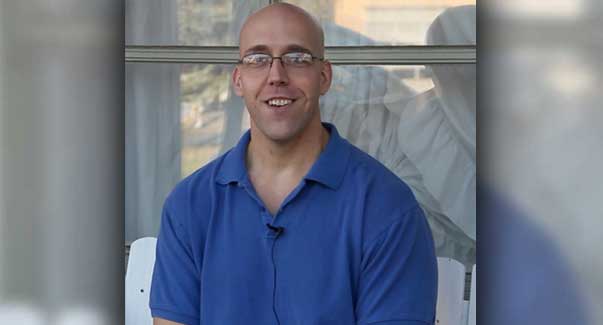 I Was a Typical Teenager: I Gave No Real Thought to Anything Spiritual

My name is Corey Petroske, and this is my story.
I was raised attending a United Church of Christ/Lutheran church, whose membership mostly consisted of middle-aged to senior-citizen Pennsylvania Dutch members. There were some other young kids, but they didn’t stay very long. So, obviously, I didn’t feel like I fit in. But, nonetheless, mom always made sure that my brother and I did all the little-kid church stuff. Things like, getting “baptized,” being in Sunday school, and going to Vacation Bible School. These things meant nothing more to me than just fun. As I got older, I continued doing all the good-little-boy things: confirmation class, youth group, cub scouts and little league. Eventually, I turned into a teenager. Not a drinking, smoking, drug-abusing, or fornicating teenager. More like a rock-music-listening, trying-to-fit-in, bitter deep inside, happy on the outside kind of teenager. I did not give any real thought to anything spiritual. Than one day, when I was 17 years of age, I was heading to my job at a fast-food restaurant. I was at a stop sign, ready to turn left on a back road. I saw a big white work-van coming from my left, about to make a right-hand turn onto my road. As he turned, he came to a sudden stop a few feet away from my car. I saw my youth group leader in the driver’s seat smiling at me. At that time, I jokingly yelled out the window, “What are you trying to do, get us both killed?” He really shocked me, when he said, "No, but if I did, would you go to heaven or hell?"

I had no answer, so he told me to look it up and give him a call. After the initial shock wore off, I resumed my trip to work in a semi-curious state. I did my day’s work and went home to try to satisfy my curiosity. I looked through the Bible a while. When I thought I had the answer, I gave him a call. His reply, “Nope, try again.” So I did. Every couple days, we repeated the process, until he finally directed me to John 3:16: “For God so loved the world, that he gave his only begotten Son, that whosoever believeth in him should not perish, but have everlasting life.” I turned to the verse, read it and we talked about it for a while. I told him that I believed in God, and Jesus, and what He did on the cross. I could tell that he was trying to take the conversation to a little more depth, but I had no idea what else to do or say. I guess my mind was just not open to deep religious matters.
So I went on like that for two or three years, just out having fun, being a teenager. A friend of mine and I made a habit of spending each Monday evening at an all-night diner. We were just two guys hanging out, eating cake and talking about cars and girls. But, somehow, this Monday was different. We both decided that we were in a rut. We decided to go to a different restaurant. No big deal, right? We both agreed on going to “Friendly’s.” We got there, ordered our food, nothing spectacular. But, somehow, one of the waitresses, Abbi, seemed different. She was very cheery and constantly smiling. She actually seemed happy to be alive.

Abbi brought us our food, and, after we ate it, she came over and started talking to us. My friend and I were both trying to impress her by showing off our cars. She tried to act interested, but, eventually, she brought up religion. She invited us both to attend her church – the Lehigh Valley Baptist Church. I was kind of hesitant, but my friend jumped at the invitation. He went to a few services and told me how great it was. I was skeptical, but I decided to go anyway. As it turned out, I actually enjoyed it. A phenomenon that was difficult for me to understand at the time. I continued going to her church, and took part in a four-week Bible study with a man who turned out to be living a few miles away from my house. The study was designed to basically introduce me to salvation, which I knew nothing about. I finished the study, but did not give it much thought. I just went through the motions. I didn’t have to go there too long before I realized that the people were different. They were all so nice and outgoing and had a time and a place in their lives where they were saved and had their lives changed forever. I just didn’t have that.

“I handed my life over to God, repented of my sins, and accepted Jesus Christ into my heart, as my Lord and personal Savior.”

One night, after a Wednesday evening service, a group of kids from church went out to “Rita’s” (a local Italian-ice drive-in). Afterwards, we went back to the church to get our cars and go home. We stood in the parking lot for a while and talked about everything and nothing. Eventually everyone left except me, Abbi, and her sister, Katina. We were talking for awhile, then I asked them something that had been bothering me for awhile. I asked, “How can I know for sure that I am saved?” They tried to answer my question, but told me that I’d be better off talking to the pastor, who, they assured me, was very easy to talk to.
Despite my preconceived notions of what it would be like, I agreed to talk to him. I’d do anything to get rid of this heavy heart that I had. I just had to know one way or the other – saved or lost?

They made an appointment for me to talk to the pastor on the following Sunday at 5 p.m. I could hardly wait. On the way to my appointment, I had three very, very close-call accidents. Obviously, Satan was trying to keep me away from that church. Nonetheless, I finally got there and met with the pastor in his office. After I realized that he really wasn’t the horrible authority figure I thought he would be, I explained my situation to him. We talked for a while. I finally realized that I knew how to be saved, but since I told him that I prayed for God to save me for three or four days before that, we realized that I didn’t really have much faith that He could do it. The pastor showed me some Bible verses that said God wants everyone to be saved. I bowed my head, and right there fell to pieces. I set all my pride aside and cried like a baby. I finally saw myself as God saw me. I was a wretched, pathetic sinner with no hope, on my own, for an eternity in Heaven. On Sunday August 4th, 1996, at 5:20 p.m., I handed my life over to God, repented of my sins, and accepted Jesus Christ into my heart, as my Lord and personal Savior.

Since that day, my life has not been even remotely the same. I now have a purpose in life and something to look forward to after this body dies off in a few short decades. I now live for God – after all, He died for me. He died for you, too. I could talk to you until I’m blue in the face, giving you example after example of how the Lord changed my life and my heart. The Bible says in 2 Corinthians 5:17, “Therefore if any man be in Christ, he is a new creature: old things are passed away; behold, all things are become new.”

I’m sure it’s impossible for you to truly understand what He has done, and is still doing in me, and countless others, unless you accept Him into your heart and into your life. Believe me, you’ll never regret it.